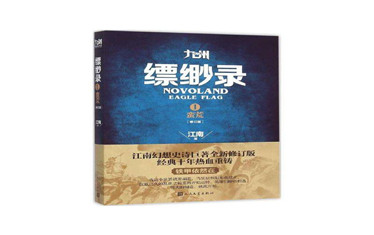 Jiuzhou is a world constructed based on Chinese history and fairytales. It was built in 2002 by a group of young authors who joined forces to start the magazine Jiuzhou Fantasy and published a series of Jiuzhou novels. Jiuzhou: The Nebulous Chronicles is the foundation of the world of Jiuzhou, it is one of the most important novels in China’s modern fantasy fiction, and it is the best work from Yang’s repertoire to-date. In the past 10 years, 6 volumes has been published, and sold around 2 million copies. The depth of its content and delicate portrayal of characters combining with an epical storyline could be compared to A Song of Ice and Fire. A traditional Chinese Edition was published in Taiwan in 2010.
作者简介：
江南
Ricardo Z. Yang was born in 1977. He graduated with a Bachelors degree in chemistry from Beijing University and then went to Washington University in St Louis, USA for postgraduate studies. Yang’s literary career started with his memoir about college life at Beijing University titled The Youth Here. This novel proves to be an inspiration among students. Yang is one of the front-runners in Chinese fantasy genre. His fantasy works Dragon Clans series broke a record in China by selling over 1.5 million copies.
推荐项目